Renal artery stenosis is the narrowing of the artery supplying the kidneys, which leads to secondary hypertension and which can be treated in Turkey before it is too late, either by catheterization or surgery.

Renal artery stenosis is the narrowing of the artery that supplies the kidneys, either from one side or from both sides (ie, in one or both kidney arteries).
Stenosis occurs in 80 % cases due to hardening of the arteries, the main artery (aorta) and artery branching from it (kidney).
As a result, arterial hypertension caused by activation of the renin-angiotensin-aldosterone system can develop.
Therefore, renal artery stenosis is often accompanied by high blood pressure. What is renal artery stenosis?

This affects most elderly smokers as well. Also, 20 % patients had congenital renal artery stenosis (especially women).
In this condition, stenosis of the renal arteries is caused by the muscles of the vessel wall and the structure of the connective tissue in the vessel.

A distinction is made between the following types of renal artery stenosis:

Atherosclerotic stenosis of the renal arteries:

Fibromuscular stenosis of the renal artery:

In this form of the disease, the thickness of the vascular wall of the renal artery increases, thus narrowing the opening of the blood vessels. This form mainly affects young people.

In 1% to 5% of all cases, renal artery stenosis is the cause of hypertension.

Causes of narrowing of the renal arteries:

It is the most common cause of renal artery stenosis, accounting for 60% to 90% cases.
It mainly occurs at the junction between the aorta and the renal arteries. It is a change in the vascular connective tissue.
Renal artery stenosis is more common in young patients and most likely occurs in the middle third of the renal artery.

Such as Takayasu's arteritis (unspecified aortitis).

Such as injuries or aneurysms of the renal artery or thrombosis.

The pathophysiology of renal artery stenosis may be explained by the Goldblatt effect. If the diameter of the renal artery is reduced to less than 40 percent, the blood flow in the kidney is reduced.
The kidneys react to reduced blood flow leading to increased release of renin, which via the renin-angiotensin-aldosterone system leads to vasoconstriction (vasoconstriction) and increased sodium and water reabsorption.
This results in an increase in systemic blood pressure.

In this way, the diseased kidneys try to improve the restricted blood flow, but they also increase the pressure in the body's circulation to values that are considered satisfactory. 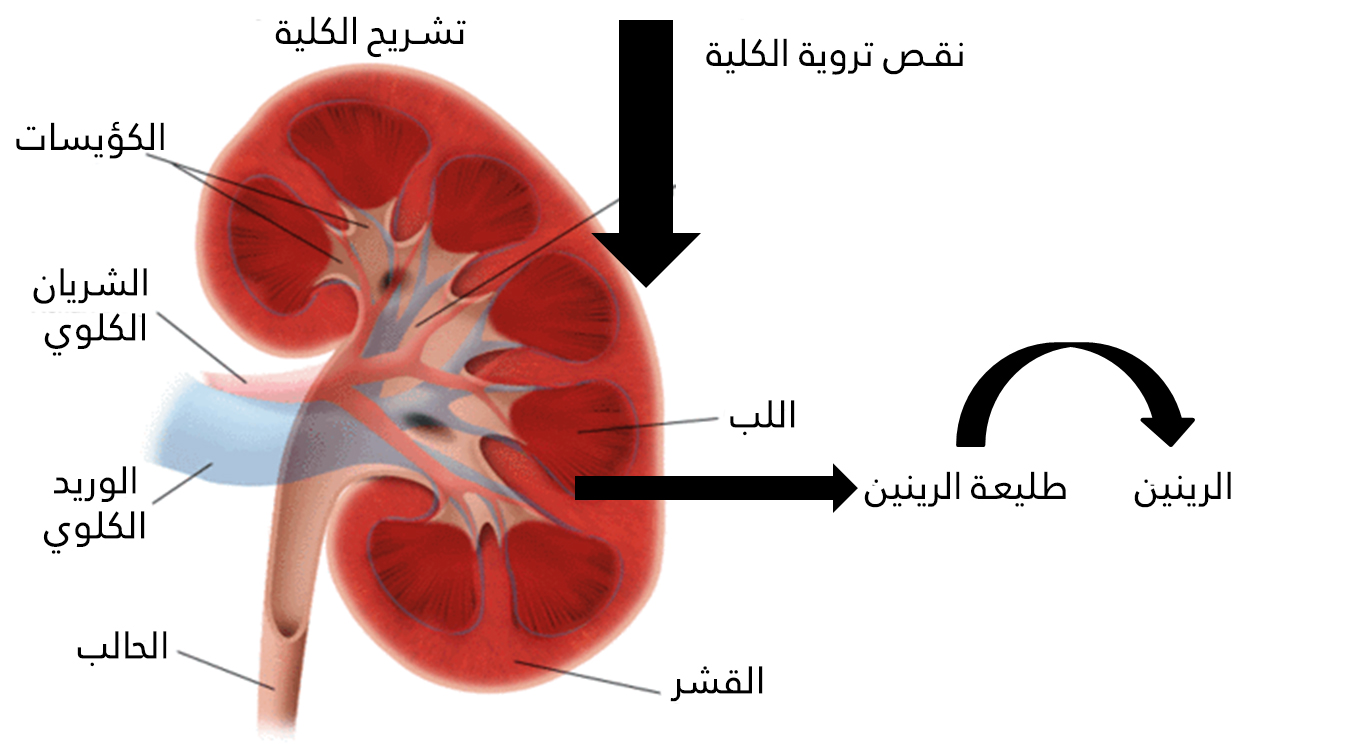 It is not always necessary for the disease to have symptoms, but it can also go without symptoms.
However, vascular hypertension occurs in many cases. And
It is high blood pressure caused by kidney disease. Additionally, blood flow to the kidneys is reduced, which can lead to kidney impairment.

In general, possible symptoms include:

In lean people, renal artery stenosis can be observed with a stethoscope.
During the physical exam, a flowing noise is heard in the abdomen and waist area, which indicates changes in the blood vessels of the kidneys.
Vascular change is primarily diagnosed by ultrasound examination of the kidneys and blood vessels.

During the examination, the rate of blood flow through the vessels and the width of the vessel can be measured.

If significant constriction can be detected with a low flow velocity, treatment is necessary.
X-rays are not used in the ultrasound examination, which is why it is especially convenient for the patient.

The following treatment options are available:

ACE inhibitors are used with beta-blockers as medicine. But when drug treatment fails, and when there is no improvement in blood pressure values, surgical procedures become an option.

NoticeableIn the case of renal artery stenosis of both kidneys or if only one kidney is present, treatment with ACE inhibitors can lead to acute renal failure and is not recommended in this case.

Percutaneous angioplasty (PTA) is successful in 80% renal artery stenosis, often with subsequent temporary tube implantation. as with Cardiac catheterizationA balloon is pushed into the renal artery through a catheter. This balloon is then expanded at the site of the defect to expand the vessel.
If necessary, a temporary intravascular tube may be used. The temporary tube is intended to ensure that the blood vessel remains open

PTA is only performed if pharmacological treatment of hypertension does not lead to an adequate decrease in pressure or if the artery is more than 70% occluded and therefore no improvement in hypertension is expected.

In rare cases, surgery may be necessary, for example, if catheter treatment is unsuccessful.

During surgery, the narrowed portion of the blood vessel is removed and, if necessary, attached to an artificial vascular tip.

The cause of renal artery stenosis can usually be corrected.

you can Contact us to identify The latest treatment methods in Turkey.

The most important frequently asked questions about the treatment of renal artery stenosis in Turkey:

Renal artery stenosis caused by fibromuscular dysplasia is fatal and may eventually lead to kidney failure.

How does renal artery stenosis cause high blood pressure?

Because your kidneys don't get enough blood, they respond by making a hormone that raises your blood pressure.

How common is renal artery stenosis?

What are the treatment methods for renal artery stenosis in Turkey?

Treatment methods for renal artery stenosis in Turkey are either by catheterization or surgery. Lymphangioma is a benign growth of the lymph vessels. Lymphangioma is caused by a disorder of the lymphatic vascular system. Although the disease is very rare, it occurs in a large number of cases, in newborns or at least in the first year after birth. tumor...

END_OF_DOCUMENT_TOKEN_TO_BE_REPLACED Hemodialysis shunt - arteriovenous shunt In case of severe impairment or absence of kidney function, it is necessary to perform hemodialysis regularly through a dialysis machine (blood dialysis) in a hemodialysis center, so that the metabolic products and harmful substances transferred by the kidneys into the patient's bloodstream can ..

END_OF_DOCUMENT_TOKEN_TO_BE_REPLACED Learn about the best ways to treat aortic stenosis with aortic bypass surgery, which is performed by the most skilled cardiovascular surgeons in Turkey. Definition of aortic artery bypass surgery Artificial tubes (grafts) are placed near a portion of a blocked or narrowed blood vessel. Create a path...