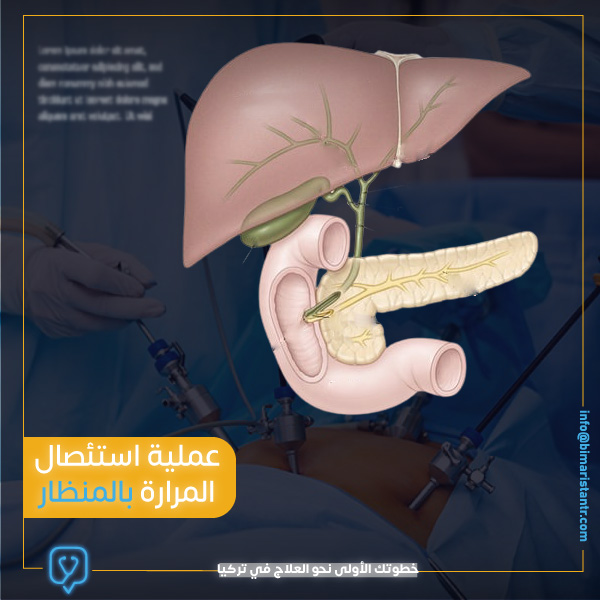 The formation of painful gallstones is a common and serious problem if not treated, you can now perform laparoscopic cholecystectomy in Turkey and prevent these stones from forming again and return to your home the same day.

A glimpse of the gallbladder

The gallbladder is a small, pear-shaped organ located under the liver in the upper right quadrant of the abdomen that collects and stores bile (a liquid produced by the liver that helps digest fats) and increases its concentration.

Changes in the composition and concentration of bile stored in the gallbladder due to hormones, medications, rapid changes in weight or diet may lead to the formation of solid masses of bile called gallstones. 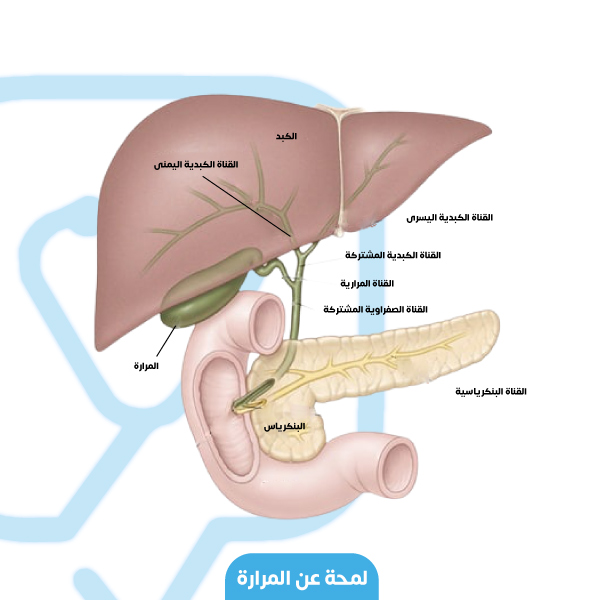 Cholelithiasis is very common and may be associated with intermittent abdominal pain, nausea and vomiting, usually after eating.

The risk of gallstone formation increases in women, especially those who have given birth to children, obese people, and people over the age of 40, and when there is a family history of cholelithiasis.

Gallstones formed in the gallbladder can pass out into the bile ducts and block the normal flow of bile, leading to cholestasis that manifests as severe abdominal pain, nausea, vomiting, indigestion, fever and jaundice (yellow color of the skin) of the obstructive type. This stasis predisposes to cholecystitis and infection.

Cholecystitis presents with persistent acute abdominal pain, fever, nausea and vomiting, which necessitates a visit to the doctor who performs an ultrasound to confirm the diagnosis and refer the patient to surgery when needed.

If these gallstones stop at the level of the collecting duct and block it, the flow of pancreatic juices also stops and the digestive pancreatic enzymes are activated inside the pancreas, which results in pancreatitis, in addition to the symptoms of cholestasis mentioned previously. 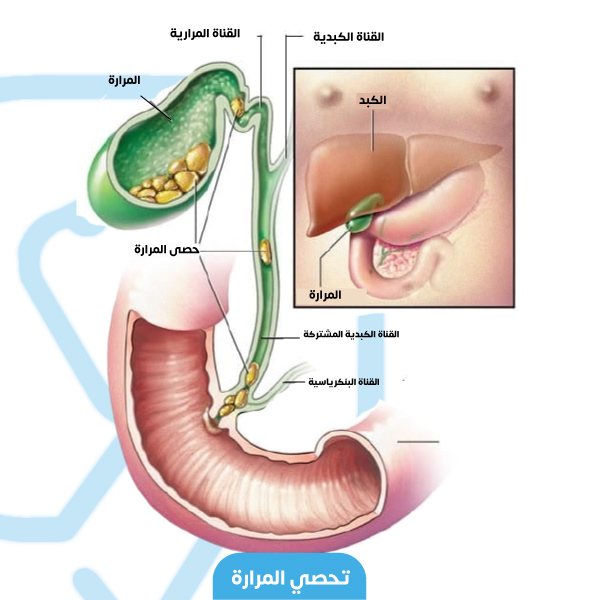 Gallstones may not need treatment if they are small and not causing problems.
Cholecystectomy is indicated in one of the following cases:

In a few cases, pills to dissolve gallstones are indicated, but they have not been proven effective in treating gallstones, making cholecystectomy the best treatment in most cases.

In Turkey, there are two ways to perform cholecystectomy:

Open cholecystectomyIn which the surgeon opens the abdomen and removes the gallbladder through a 12.5-17.5 cm incision on the right side under the ribs so that the surgeon can see the gallbladder and separate it from the neighboring organs. Two hours. 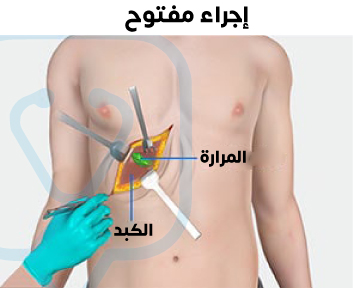 Laparoscopic (laparoscopic) gallbladder surgery laparoscopic cholecystectomyIn which the surgeon makes four small incisions, each of which is less than 2.5 cm (less than one inch) long, to insert a long, thin tube equipped with a precise camera and surgical tools called a laparoscope. Carbon dioxide may be pumped through these incisions into the abdominal cavity to inflate the surgical area And to facilitate vision, where the surgeon performs this operation while looking at the monitoring screen, and then the gallbladder is removed through one of these incisions. This process also takes an hour or two. 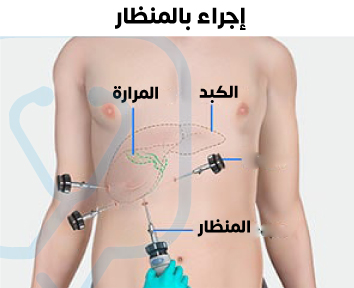 The previous two operations are performed under general anesthesia, meaning that the patient is asleep during the operation and does not feel any pain during its implementation.

Cholecystectomy carries a risk of complications, including:

Most of these complications are rare, meaning they almost never occur.

Removing the gallbladder will relieve the pain, treat the inflammation caused by the gallstones, and prevent them from forming again.

If cholelithiasis is not treated, the pain and infection will worsen, and the gallbladder may rupture and threaten the patient's life.

It has shown many Studies Its effectiveness when selecting the right patients for this procedure.
As laparoscopic cholecystectomy is not suitable for all people, after starting laparoscopic surgery, we may have to transfer the patient to open surgery.

Some cases that require open surgery or referral to it:

Switching to open surgery is not a problem for the patient, the surgeon will decide the optimal and safest treatment option for cholecystectomy.

A person can live a normal life after gallbladder removal, where the liver adapts to the condition and produces enough bile to digest food, but instead of storing it in the gallbladder it will be excreted directly in the digestive system.

Patients who undergo laparoscopic cholecystectomy often go home the same day of the procedure or have an overnight stay in the hospital, and full recovery takes about a week.

Patients can return to eating normally upon returning home.

It is common for the patient to feel mild to moderate pain at the site of the operation during several days after the surgery, which is managed with pain relievers.

The dressings can be removed the day after surgery, allowing the patient to return to showering normally (some wounds may need special care).

Some people may experience diarrhea after a cholecystectomy that usually goes away on its own after a few weeks or months.

After a cholecystectomy, there are some tips that help the patient recover faster, including:

The patient should contact his doctor if he encounters any of the following problems after cholecystectomy:

Bimaristan Medical Center It is your first choice for treatment in Turkey.
We guide you to the best expert specialists in all departments.
We facilitate the language of communication between you and everyone through specialized Arab doctors who will help you communicate with your doctor.
We help you secure the right treatment and high-end service in the most modern hospitals and medical centers in Turkey.
We provide our services extensively and precisely.
We accompany you step by step towards recovery.
Free consultations around the clock.
don't hesitate toContact usBimaristan, your family center in Turkey.

When should the gallbladder be removed?

Cholecystectomy is indicated for cholelithiasis, biliary obstruction, and cholecystitis or pancreatitis.

How long is laparoscopic cholecystectomy?

The duration Laparoscopic cholecystectomy is one to two hours.

How long does it take to rest after gallbladder surgery?

How is fat digested after cholecystectomy?

The human liver adapts to the situation and produces enough bile to digest the fat, but instead of storing it in the gallbladder it will be excreted directly into the digestive system.

There may be risks and pain as a result of this procedure, but these risks are rare and the pain is minimal, and all patients feel much better after removing the gallbladder, and not performing the operation may cause serious problems that may end in death. 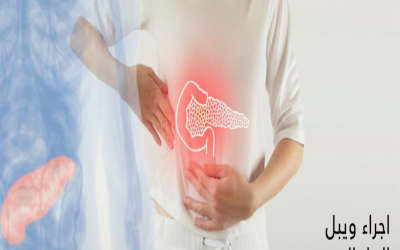 The Whipple operation is often performed as a surgical treatment for pancreatic head cancer, bile duct cancer, or duodenal cancer. Other indications include chronic pancreatitis, some benign pancreatic tumors, metastatic cancer of the pancreas, and multiple endocrine neoplasia of the first type.
Whipple procedure, the surgical procedure of choice for resectable pancreatic duct cancer