Uterine diseases and its problems are among the most common global and gynecological diseases in particular, and hysterectomy is a solution to many of these problems, and Turkey has witnessed a rise in the success rates of hysterectomies with a significant decrease in deaths.

Hysterectomy is one of the most common treatment methods in recent times, despite the development of other treatment methods, but especially in the case of advanced age, doctors still resort to the process of removing the uterus to ensure that the disease does not return.

Overview of the uterus and female reproductive system

The female reproductive system consists of external and internal organs.
The function of the external organs is to assist sexual intercourse and to facilitate the entry of the man’s sperm into the vagina and through it to the cervix and uterus. They also secrete various substances to prevent infections, and these organs are:
As for the internal organs, their function is pregnancy and procreation and giving the female her characteristics through the secretion of various hormones, and it consists of:
The organ that is most susceptible to disease is the uterus, where thousands of women suffer from uterine diseases annually, and its disorders constitute about 2-4% disorders in humans.

The function of the uterus is one of the most important functions for the continuation of human life on earth, as it provides an appropriate environment and incubation for the growth and development of the fetus before it can live on its own outside the mother’s body.

What is a hysterectomy and why is it performed?

A hysterectomy is a procedure or surgery to remove the uterus and may involve removing the ovaries, fallopian tubes, and nearby tissues.
After this operation, the woman will not be able to get pregnant and give birth in any way.
The operation to remove the uterus is the second most common operation in women after childbirth by caesarean section, Cesarean Delivery, where about 400,000 hysterectomies are performed in the United States of America per year.
There are many reasons for doing this process, including:

Are there alternatives to a hysterectomy?

The matter varies according to the reason that prompted the doctor to think about the hysterectomy, in addition to the patient’s condition and whether she wanted to have children or if she made the decision to stop having children, as performing the hysterectomy will prevent the patient from having children permanently and may enter her in early menopause (if she did not enter the age of despair already) if the ovaries were also removed.
In the case of muscle tumors or fibrous You can wait and watch for it to shrink and go on its own after menopause, and other minimally invasive surgeries can also be done as excision of leiomyomas or fibrous Laparoscopic (tumor removal only) and many other operations.
In the case of Endometriosis The doctor can prescribe various hormonal drugs that help alleviate the condition or treat it permanently, and the ectopia can be removed locally using the endoscope.
In some cases, performing different exercises to strengthen the muscles that stabilize the uterus is useful, such as Kegel exercises to strengthen the pelvic muscles when there is indicative of mercy.
However, total hysterectomy remains the best and least recurring option and is suitable for women who have entered menopause, as many previous treatments carry a high recurrence rate or may not be curative enough.
Bimaristan Medical Center helps you determine the optimal treatment method (whether hysterectomy or other) that suits your case based on the opinions of the best and most skilled doctors and conducts the selected treatment in the most modern medical centers in Turkey.

There are several types of hysterectomy due to different Etiology, surrounding factors, and the need for excision of adjacent organs in some cases.
These types are:

How is a hysterectomy performed?

Before the procedure, the doctor explains the steps of the surgery and the risks and complications that the patient should expect and may order blood and urine samples in some cases or even perform a pelvic ultrasound.
Hysterectomy has several surgical approaches, and the doctor often chooses the best method based on his experience and the patient's condition.
The operation can be performed under general or local anesthesia according to the patient's preference.
Among the methods of hysterectomy in Turkey:

In this procedure, the doctor removes the uterus through a wide incision in the abdomen.
The incision can be horizontal or vertical and be about six inches. The vertical incision runs from the navel to the pubic bone, and the horizontal incision runs above the pubic hair line.
Mostly, this method is resorted to in the event of cancer, several fibroids, or if the uterus is very large, and we resort to it in the presence of adhesions that make it difficult to perform other operations.

Compared to the rest of the methods, this method is the most dangerous and mixed. Infection of the wound, bleeding, blood clots, and damage to nerves and nearby tissues are among the most important complications of this operation. The patient also needs several days in the hospital until the wound heals completely, and recovery occurs within six weeks.
but scaling Recent Studies Despite the many complications of this operation, it remains a basic surgical method in the medical literature, despite the development of other methods.

It is a minimally invasive operation, where no incision is made in the abdomen, but a simple incision in the vagina, and a hysterectomy is performed through it.
The operation does not take more than an hour and the patient does not stay in the hospital more than one night and can be discharged on the same day.
It is the preferred procedure, the least complicated and the fastest, and recovery occurs within four weeks.

The doctor inserts the endoscope through one of the small incisions in the intestine and also inserts other medical and surgical instruments through the other incisions, and the uterus is removed in small pieces, each piece separately.
Usually four or three incisions are made and the doctor inserts the laparoscope through the incision near the belly button.
Hysterectomy can be done laparoscopically, but instead of removing the uterus through surgical incisions, the uterus is removed through the vagina, and the operation is then called transvaginal laparoscopic hysterectomy.
As for the robot-assisted hysterectomy, the doctor uses a robotic arm to control the surgical tools, where the uterus and the doctor on a computer screen remotely control the surgical tools.
He did not see any difference in the surgical results between using the robot to perform the operation or not using it, but the operation with the help of the robot takes longer than the rest of the methods.
Laparoscopic surgery has several benefits, including reducing the risk, the time, the recovery period, and the length of stay in the hospital, as the patient can often go home the day after the operation.
As with a transvaginal hysterectomy, the full recovery process from a laparoscopic hysterectomy takes about four weeks.

Complications and risks of hysterectomy

Swelling and numbness at the incision site.

Abdominal sagging due to the surgical incision if it is from the abdomen.

Early menopause symptoms if the ovaries are removed.

What should I expect after the hysterectomy?

Expected results vary according to the surgery performed, and also vary greatly depending on the age and health of the patient.
If the ovaries are removed, the woman will enter early menopause and her menstrual cycle will stop, and major hormonal changes will occur that may affect her life, psyche, and even her sexual life.
In most cases, women return to a normal sexual life after the hysterectomy, but sometimes the sexual life may be disturbed, and women may enter a stage of depression because they feel inferior after the hysterectomy.
Other complications can appear as attacks of high fever, sweating and poor appetite, or even vaginal discharge that was not present before.
The patient should consult the doctor if these complications appear on her. The doctor can then prescribe some sedative medications, reassure the patient and help the family understand the matter and understand what is going on with the patient.

Turkey is distinguished by the presence of the best hospitals equipped with advanced technologies and a medical staff who has successfully performed this type of operation a large number of times.
Recently, Turkey has become one of the leading countries in the field of medical tourism in the world, due to the provision of appropriate treatment in advanced centers and at a low cost.
Bimaristan Medical Center It is your first choice For treatment in Turkey.
We guide you to the best expert specialists in all departments.
We facilitate the language of communication between you and everyone through specialized Arab doctors who will help you communicate with your doctor.
We help you secure the right treatment and high-end service in the most modern hospitals and medical centers in Turkey.
We provide our services extensively and precisely.
We accompany you step by step towards recovery.
Free consultations around the clock.
don't hesitate toContact usBimaristan, your family center in Turkey.

Hysterectomy is considered one of the safe operations, especially in Turkey, after the development of the treatment divorce greatly and the increase in medical and surgical experience over the previous years.

The effects of the operation vary according to the organs removed with the uterus. If the ovaries are removed, the menstrual cycle will be interrupted and the woman will enter menopause. It was before the hysterectomy, and with regard to intercourse, it is often not affected, except that in some cases the woman’s sexual desire decreases after the hysterectomy due to psychological or hormonal factors and may return after a while.

Doctors often resort to hysterectomy as a final solution to stubborn and relapsing diseases, but there are other treatments in the initial stages, such as excision of the local tumor, Kegel exercises, or various drug treatments, depending on the patient's condition.

The hysterectomy takes about an hour if it was an open incision and with no invasive cancer.
But if the operation was by endoscopy or there was invasive cancer, it may take more than that.

The cost of excision ranges fibroma By laparoscopy in Turkey about 40 thousand Turkish lira. 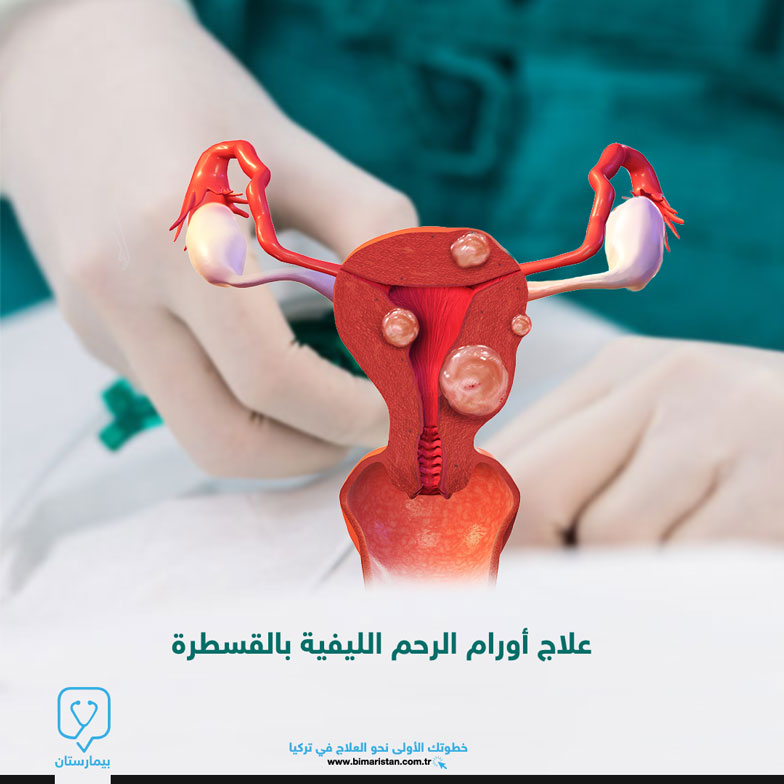 Catheterization of uterine fibroids without surgery in Turkey by catheter embolization of the uterine artery. It is performed by the most skilled doctors… Dilation and curettage (D&C) is a surgical procedure in which the lower, narrow part of the uterus (cervix) is widened to remove tissue from… Hysteroscopy in Turkey is one of the latest techniques for screening and diagnosing internal uterine diseases. Some women need a hysteroscopy… A general surgeon who worked in Akshakle Hospital in Urfa