Spina bifida is one of the common spinal cord defects seen in children and may cause a danger to the child if neglected. It is treated in Turkey by elite doctors.

What is spina bifida?

Spina bifid is a congenital malformation that results in a defect in the formation and closure of the spinal cord during the embryonic life.

Spina bifida occurs when the neural tube fails to close properly during fetal life, resulting in incomplete formation of the spinal cord and closing of the structures that protect it (the vertebrae), leaving part of the spinal cord and nerves exposed and not covered which indicate a greater risk of external injury.

Injury to the spinal cord nerves may cause serious irreversible complications such as permanent disabilities, so the visible part of the spinal nerves must be protected as soon as possible.

This deformity is common among newborns, affecting one in every 2,500 births worldwide.

This percentage may varies from each different geographical regions and races, so it is seen in the white race more than it is in the black race.

The three types of slotted steel are:

The most serious and important type of spina bifida, in this type the spinal cord and nerves migrating through the opening in the child's back.

It is seen as a cyst in the back of the child. This cyst contains cerebrospinal fluid and part of the spinal cord and nerves.

Due to the lack protection of the nerves and spinal cord, there is a high risk of neurological damage that may cause moderate to severe disabilities in the child that is irreversible.

The least serious and most common type of spina bifida, it is called hidden spina bifida because it is often asymptomatic and is rarely diagnosed in late childhood, and the diagnosis is often made by accident when an image is taken for other reasons.

In this type, two or more vertebrae are not completed, and a small opening is formed through which the meninges or the spinal cord do not migrate through the hole, and the skin is normal on the child's back (there is no cyst).

In our article, we will focus on myelomeningocele, as it is the most important form of spina bifida.

myelomeningocele is the most serious type of spina bifida, is often associated with symptoms that indict a damage to the nerves of the spinal cord.

Symptoms vary according to the location of the damage in the spinal cord and the degree of neurological damage that occurred, spina bifida may cause a range of symptoms and associated complications, including:

Myelomeningocele is almost always associated with one of the other known abnormalities Arnold Chiari, This deformity causes fluid to accumulate in the brain which lead to hydrocephalus , which may cause severe damage to the child and the possibility of him developing disability or even death.

In milder cases, spina bifida can be asymptomatic. Symptoms of occult spina bifida are often invisible and are revealed by chance when patients are photographed for other reasons.

The deformity can be detected during pregnancy or after childbirth.

The diagnosis can be established by using some tests that are conducted for the mother to detect neurological abnormalities of the fetus, including:

alpha-fetoprotein AFP is examined in the mother blood, which is a protein produced by the fetus and part of it crosses the mother’s blood through the placenta.

It is the best test for diagnosing spina bifida in the fetus before birth, as the examiner can see the abnormality during the second trimester (18 to 24 weeks) of pregnancy.

If the examining doctor suspects that the child has spina bifida, he will then order a biopsy of the amniotic fluid in order to be sure, but there are some complications accompanying the biopsy that cannot be ignored, such as the possibility of a miscarriage.

In some cases, the disease is not diagnosed until after the child is born, where a hairy area or something similar to a birthmark is noticed on the child's back, so the doctor requests an X-ray or magnetic resonance image of the spine to see the spinal cord and determine the injury or not.

Treatment of spina bifida in Turkey

In the case of myelomeningocele, surgery must be done as soon as possible to cover the nerves and spinal cord and prevent nerve damage as much as possible.

After the fetus is diagnosed with spina bifida, it will be determined if the mother is a candidate for this type of surgery.

The doctors perform the surgery by making a horizontal incision in the mother’s abdomen and then using the echogram to get a clear view of the location of the fetus and determine the location of the spina bifida and then an incision is made in the uterus to reach the back of the fetus and then the defect is repaired by removing the cyst, if any, and closing the opening in the back with the surrounding tissues .

This complex surgery has potential risks to the life of both the baby and the mother, as a rupture of the mother's uterus can lead to a miscarriage of the fetus.

This process requires the cooperation of many doctors from different specialties and extreme precision in centers equipped for this type of surgery.

The baby is born at the normal date of birth and then placed in the neonatal care unit. After birth, the neurosurgeon monitors and evaluates the baby's condition.

Examinations of the baby and magnetic resonance imaging (MRI) are requested to assess the spina bifida malformation and the surgery is often performed during the first or second day of birth where the opening in the baby's back is closed with surrounding tissues and skin under general anaesthesia.

After surgery the baby is returned to the neonatal intensive care unit for evaluation. Often the baby stays in the hospital for about one to three weeks after surgery for observation, and this process is less risky than the one that is done before birth.

One of the risks of this procedure is the damage to the spinal cord nerves with the amniotic fluid during pregnancy due to the delay in postpartum surgical intervention.

spina bifida is currently treated in Turkey by a team of specialized doctors in surgical centers equipped with the latest technology.

Clinical research indicates that prenatal spina bifida surgery has better outcomes for the baby's life but carries a higher risk for the mother.

At the age of 3, 42% infants who underwent prenatal surgery could walk independently, while the proportion was 21% for postnatal surgery infants.

Complications of spina bifida and how to treat them

Spina bifida in children may cause complications that affect the child's quality of life, such as partial or permanent physical disabilities, in addition to hydrocephalus, which may have serious intellectual consequences for children's lives. We will talk about how to treat these complications when they occur.

CSF storage in the head can cause high pressure in the brain, leading to potentially fatal brain problems and disabilities.
The child needs a surgery to drain the fluid, where the doctor places a shunt from the brain to the abdomen to drain the cerebrospinal fluid. The shunt is replaced if it becomes blocked, or when the child grows, he may need a new shunt that is longer than the old shunt.

Physical therapy is an important way to help the legs move in spina bifida patients so that the patient can live his life independently, meaning that he does not need the support of medical devices such as a wheelchair.
The primary goal of physical therapy is to prevent the development of muscular weakness in children as there is an important relationship between spina bifida and gait.

Treatment of bladder and bowel problems

Urinary incontinence is a common symptom in spina bifida children. We can help these patients by giving medications that help relax the bladder in order to store a larger amount of urine, or a surgert can be performed to expand the bladder to relieve the suffering of this children and their families.
To treat constipation, laxatives can be given to help empty the intestines.

Folic acid deficiency can increase the risk of various neurological abnormalities, both at the level of the brain and the spine, as it is necessary for the development of the neural tube in the fetus.

Having a family history of neural tube defects

The risk of spina bifida in infants increases if there was a previous pregnancy of the same mother with sclerosing spina bifida.

The risk of the incident to the fetus increases when a pregnant woman suffers from diabetes is .

The basic step for prevention is folic acid, which is important to avoid neural tube defects, as the pregnant woman is given a dose of 400 micrograms, and the woman who plans to have a baby must be drawn to the necessity of taking the drug throughout pregnancy and with eating a healthy diet containing folic.

Studies have proven that taking folic acid reduces the risk of congenital nervous system defects. For mothers of spina bifida children who have a previous fetus affected by the disease or any diseases related to the neural tube, they must take folic acid in double doses due to the increased risk of infection for the next fetus.

Some foods rich in folic acid such as vegetables, fruits, egg yolks, rice and grain products.

There is no cure for spina bifida because it is a congenital malformation seen at the birth of the child. However, surgery can be performed to cover the nerves where the sclerosus split to prevent the development of serious complications of the disease, in addition to treatments that aim to improve the quality of life in children, such as physical therapy and rehabilitation.

Muscular weakness of the legs may occur as a result of spina bifida deformation that affects walking and may be severe to the point of causing paralysis, this muscle weakness occurs due to damage to the unprotected nerves of the spine in the area of spina bifida.

The relationship between spina bifida and walking depends on the degree, size and type of deformity. Walking is more affected in the case of myelomeningocele (the most severe type of spina bifida).

The cleft steel operation may be associated with some complications, such as bleeding or leakage of the cerebrospinal fluid at the site of the operation wound, and the spinal cord and its nerves may be injured by the surgeon during the operation, which constitutes the most serious complication of cleft spine surgery.

In fact, spina bifida by itself does not cause an early death for the injured, but the serious complications that occur can cause sudden death for the patient.

Failure of the pregnant mother to take folic acid (vitamin B9) increases the risk of the fetus developing spina bifida, according to studies, and pregnant women with diabetes and obesity are all risk factors for spina bifida.

After the surgery, the child will stay for about 4 to 5 days in the hospital to recover and be monitored by the doctors.

spina bifida can cause mental retardation if fluid builds up inside the cranium and high tension within the brain may cause serious consequences for the child, so the fluid must be drained quickly. 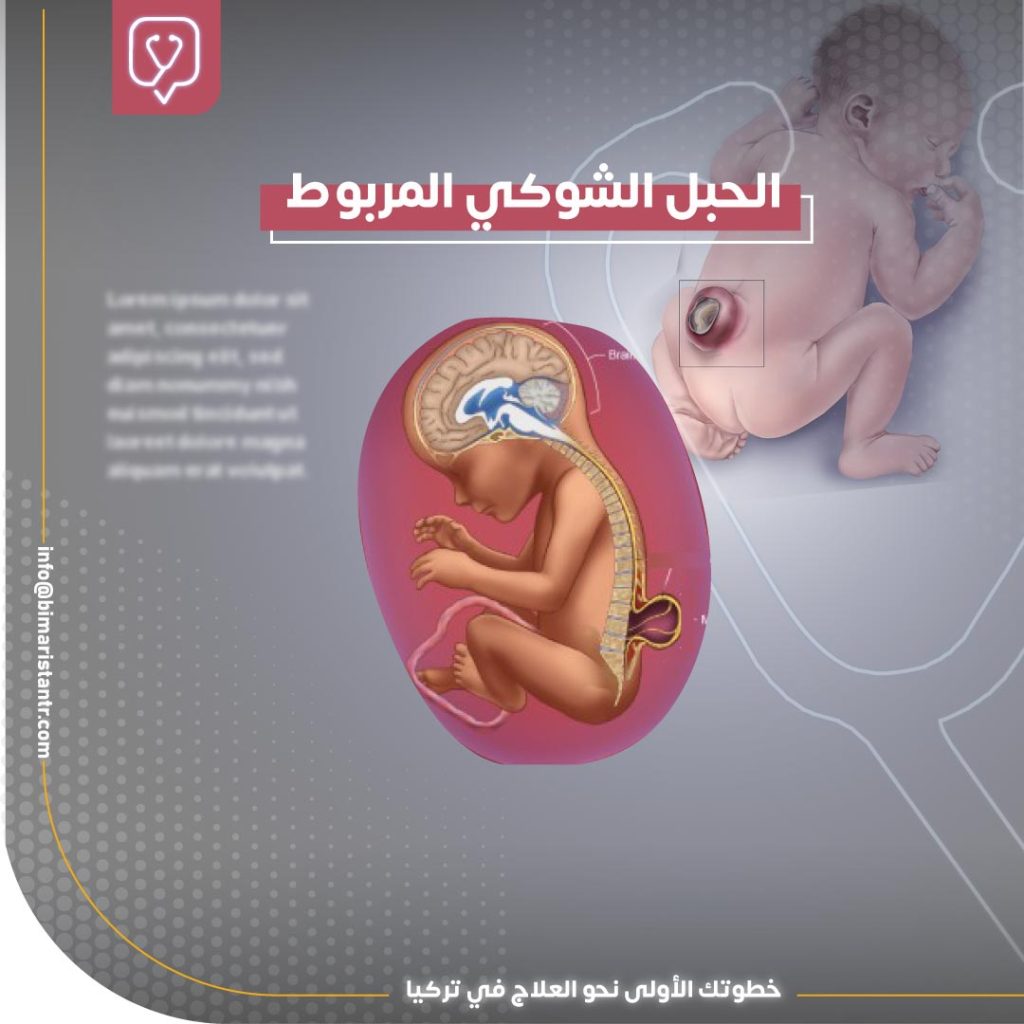 The spinal cord is an important nerve center, and the disorders that affect it, including the tethered cord, must be given attention...