Robotic knee replacement surgery in Turkey is considered the best and latest method to replace the joint in Turkey and the world, as it gives the best results that can be obtained when replacing the joint.

What is the goal of Robotic knee replacement?

The main reasons for knee arthroplasty in general are osteoarthritis or rheumatic knee arthritis.
Knee joint replacement surgeries are usually performed if initial treatments failed to give satisfying results and some of these treatments are:
• Weight loss.
• Medicines, whether to strengthen the joint or anti-inflammatory drugs.
• Exercise.
• Use of assistive devices such as a knee brace.
• Knee injections Treatment, either with platelet-rich plasma or Stem Cells or knee arthroscopy.

There are several factors that affect the doctor’s choice to perform a robotic knee replacement, including:
• The extent to which the patient's daily life is affected by the problems that result from knee joint pain.
• The patient's General Health.
• Advanced age of the patient.

Doctors evaluate each patient individually to consider the patient's need for knee replacement surgery.
The robotic knee replacement operation is carried out under the operating room conditions with a robot specialized in knee surgeries, where an incision is made in the frontal area of the knee and the knee joint is opened, Three bones are connected to the knee joint: the femur, tibia and patella.

As a result of the friction of these bones with each other, gradual damage to the joint occurs, causing its erosion and causing the patient severe pain when moving. During the operation, the damaged parts are removed and the artificial knee joint is placed on the surface of the bone. The spaces are filled with bone cement after determining the appropriate dimensions, and the knee joint is covered with a mixture of metal and plastic.

The patient can return to his normal life within 30 to 60 days after the operation, and the patient is recommended to avoid heavy sports and sudden movements.

What does robot-assisted knee replacement mean?

Robotic surgery is the use of computers and robots as an aid to increase the accuracy of knee or hip replacement surgery. As planned via the computer previously without errors.
Of course, the robot cannot do anything other than what is planned and required of it.

Robotic joint surgery requires special training and expertise, and the doctor must have adequate training in this regard.
Robotic systems are specifically designed for a specific type of joint, and other brands of artificial joints cannot be placed with robotic surgery.
Our doctors are certified for robotic applications of total knee, hip and partial (unilateral) knee using the Robot named Stryker-MAKO.

What are the stages of Robotic knee replacement?

When you decide to have a knee joint replacement using robotic surgery, a COMPUTED TOMOGRAPHY CT scan of both legs is taken from the hip to the ankle.

This data is then uploaded to a computer and 3D models of your leg are created. Your doctor plans the stages of surgery step by step using special software on a computer a few weeks/or days before the operation.
The thickness of the incisions to be made in the bone is planned in advance, the balance of the ligaments, the most appropriate size of the artificial joint and the angle of its installation are calculated.

If the hip joint is to be replaced, in addition to this data, the leg lengths in millimeters are calculated and the leg length to be obtained at the end of the operation is planned in advance.

During surgery, devices called "triggers" are placed in different parts of your leg. These devices are connected to a computer to instantly report the position of the bones.

After making the appropriate incision, your doctor maps the bones with an electronic pen-shaped device and presents them to a computer.

The computer matches this map to the CT images made before the surgery, so the robot now knows how many incisions to make and in what part of the bone.
Meanwhile, the ligaments around the knee joint are tested and the incisions recalculated until optimum ligament tension is achieved. At this point, the required changes in leg length are made to maintain the proper length.

With the help of a robot, your doctor cuts the bones in the correct planned angle and direction.
The robot only works through the incisions in the pre-planned places, and never allows to bypass these areas. Your doctor performs all these steps by observing and checking the operation area in 3D on the computer screen.

After the bone incisions are completed, the experimental artificial knee joint is placed and examined using a robot.
At the same time, the balance of the soft tissues, the tension of the ligaments, the length of the leg are confirmed and if necessary, millimeter corrections can be made again.
If the doctor agrees to the measurements, the joint is placed, and after it is placed, a final examination is performed and the operation is finished.

Contact us For any inquiries about the robotic knee replacement surgery in Turkey, or any problem you found about this process.

What are the benefits of robotic surgeries and knee joint replacement with 3D technology?

The most important benefit of robotic knee arthroplasty is that it allows the surgery to be performed with much greater precision than can be seen with the eye.
As the entire surgery is planned before the operation in small parts, the robot ensures that this plan is applied in the most accurate manner during the operation.
If necessary, this plan can be changed by exact measurements and not guesswork during the operation.
Because of this, prosthetics are longer lasting than traditional methods.

During a traditional knee joint replacement, a long metal rod must be placed inside the femur canal.
The bone marrow and fat added to the circulatory system can cause problems for heart patients.
This risk is eliminated because the bone canal is not opened during robotic surgery.

Additionally, if there are devices attached to the femur that are not suitable for removal (eg, screws for an old fracture), planning and surgery using robotic surgery is ideal.
The femoral canal is not punctured in the robotic method.

The process of replacing the knee joint with a robot is a process that takes neither long nor short time to fully recover, and since the knee is one of the joints that bears the weight of the body, the patient should avoid knee stress in the first weeks after the operation.

The patient often begins to walk using crutches or may sit in a wheelchair if he cannot walk. About four to five weeks after the operation, most patients can walk short distances without assistance.

Over time and with the help of a team physical therapy The patient can walk longer distances and can drive a car or perform simple sports, but he must pay attention to his body and the signals it gives and avoid bending or bending the knee joint.

About a year after the robotic knee replacement surgery, the knee joint regains its full strength, and the patient can perform all life activities with attention to not stress the knee for long periods of time.

The difference between robotic surgery and conventional surgery in a nutshell

• Extremely high precision in the anatomical position.
• The movement of the knee is more natural.
• Increasing the longevity of the joint.
• Return to normalcy faster.
• All four ligaments (ACL, PCL, MCL, LCL) remain intact.
• There is no muscle cutting.
• The non-articular cartilage is not affected.
• Smaller incisions.
• Less pain due to making fewer incisions during a robotic knee replacement.
• Minimal blood loss.
• The risk of blood clots is very low.

What are the damages and problems of the knee joint replacement using the robot?

Ordinary X-rays are not enough for accurate planning before the operation, as they require 3D axial imaging, this increases the amount of radiation that the patient will be exposed to.

Because of the controls performed at each stage of the surgery, the knee joint replacement procedure takes 15-25 minutes longer than a standard knee replacement, but this is an acceptable time to improve the results of the procedure.

Here are the some of the most common complications of knee replacement surgery:
• The artificial knee has a certain life and wears out over time, but its life is longer when it is implanted by the robot.
• Bleeding (possible in every surgery).
• Formation of clots, whether in the lung or leg.
• Heart failure.
• Stiffness in the knee.
• Apoplexy.
• Damage to the knee nerves.

Studies have shown that not opening a canal in the femur will reduce blood loss and pain after surgery.
Studies have also shown that robotic surgery has the advantages of early rehabilitation and shorter hospital discharge.

The success rate of robotic knee replacement surgery is also greater. Studies say that in the medium term (5-10 years), the results of robotic surgery and conventional (if well-functioning) joint prosthesis are similar.

However, at a longer follow-up, it is expected that due to the care of the angles at which the knee joint is placed and the balance of the ligaments obtained by robotic surgery, it will extend the life of the artificial knee joint. (Because robots have recently entered, there are no long-term studies, i.e. over 10 years).

And in this study It appears that the complications after knee arthroplasty were much less.
also this study shows how robotic surgery is better than traditional surgery, even if the surgeon is a skilled doctor in their field.

What artificial joints can robotic surgery be applied to?

Robotic surgery is still applied during total knee placement,Total hip replacement,and The partial (half) knee prosthesis.
Studies are continuing for its use in artificial joints of the shoulder and spine.

Robotic prosthetics surgery is performed in more than 200 centers around the world and has received FDA (Food and Drug Administration) approval in the United States.
It has been safely applied to more than 100,000 patients worldwide.
More than 300 serious scientific publications have been published on artificial joint surgery.

And also Turkey and Bimaristan's Center have paid great attention to robotic surgery in recent times until it has become one of the leading countries in this field.

also Bimaristan's Center does a great job by securing the best treatment centers in addition to the cheapest prices for joints and other used tools, and securing the best price for a robotic knee replacement.
You can also read more about Stem cell transplantation in the knee and hip joint.

The goal of robotic knee joint replacement surgery in Turkey is to secure a longer life for the joint by implanting the joint exactly as planned on the computer before the operation.

The latest studies say that the robotic joint replacement surgery has had similar results with the best skilled surgeons over the past decade, but at a longer level it is believed that robotic surgery will have better results.

Complications are the same as with regular surgery, but they are much less.

Prices in Turkey range between 5 and 20 thousand US dollars, depending on the type of knee joint and the method used for the replacement. 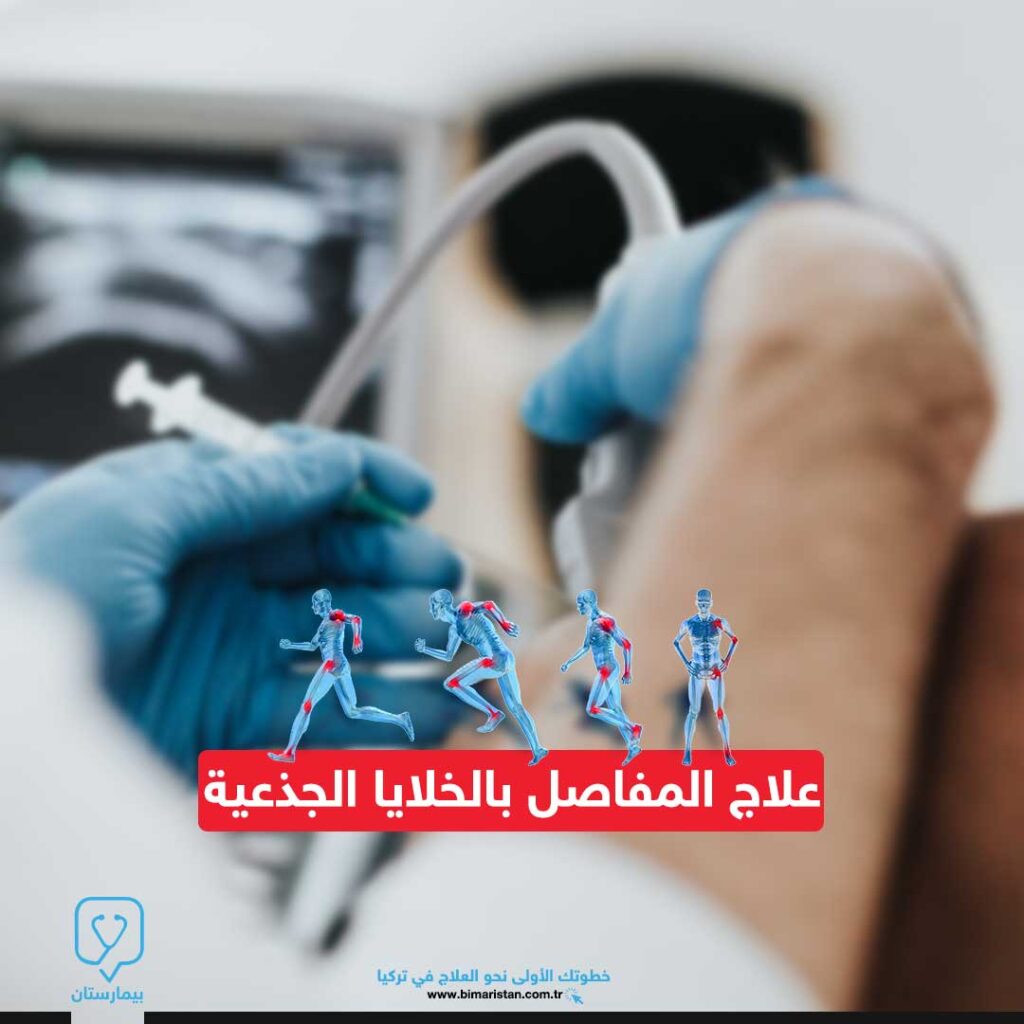