Pigeon chest causes many aesthetic and psychological problems due to its shape and location close to the heart and lungs, but currently, pigeon chest can be treated in Turkey by the most skilled doctors.

Often this deformity begins to appear suddenly during growth, specifically during puberty (at the age of 11-15 years) and continues to worsen until the bones stop growing, usually at the age of 18 years.

This deformity is rare compared to the pectus excavatum. It occurs in one child out of 1,500. It affects males more than females and is usually familial.

Causes of the protrusion of the rib cage

The exact cause of the rib cage protrusion is not yet known. The cause may be a disorder in the cartilage that connects the ribs with the sternum. When the cartilage grows faster than normal, it pushes the sternum outward, or parts of the sternum itself may grow rapidly after heart surgery. For example, open, which makes the sternum prominent.

You may see several cases of pectus carinatum within the same family, which leads us to suspect the existence of genetic causes, and pectus carinatum may be part of rare genetic disorders.
Some people with Marfan syndrome or Noonan syndrome also have a protruding rib cage as a symptom of the syndrome.

Most patients with pigeon chest pectus carinatum are asymptomatic and do not have any problems except for their chest protruding outward, but 1 out of 10 children who have chest wall deformities such as pigeon chest are affected. scoliosis.

One of the most common symptoms of pigeon chest is chest pain and tenderness usually seen in the abdominal lying position, in addition to exertional shortness of breath observed in some patients and symptoms similar to asthma in a quarter of adolescents with pigeon chest disease.
Heart tachycardia or recurrent respiratory infections may also be seen in some patients.
It should be noted that the symptoms worsen as the child's age increases and the treatment of pigeon breast becomes more difficult.

In contrast to the concavity of the chest pectum excavatum The location of the heart in the pigeon's chest is not affected, but it is associated with an increased incidence of mitral valve prolapse in patients with pigeon chest disease.

Thoracic protrusion, depending on its cause and time of appearance, can be classified into: postoperative thoracic carcinoma, which occurs when the sternum does not heal properly after surgery or thoracic trauma, and congenital thoracic carine, present from birth and idiopathic, which is the most common type and appears between the ages of 11-15 and is associated with growth spurts.

The primary test for diagnosing protrusion of the rib cage bones is a simple chest image from the front and side. CT or MRI scans are also performed to help diagnose in some special cases.

Some additional tests may be needed to make sure the heart and lungs are healthy, and some blood tests may also be done to rule out genetic causes such as Marfan syndrome and Noonan syndrome.

Pigeon breast patients are treated in Turkey using the latest surgical methods in order to improve the quality of life, and the optimal treatment method is selected depending on the severity of the injury.

If the injury is mild and does not cause symptoms, treatment of the pigeon's chest may be unnecessary and it is better not to treat it. Exercise and lifting weights may help build muscle in the chest wall, which covers the defective shape of the chest wall.

The rib cage protrusion can be treated conservatively or surgically, depending on the severity of the injury.

The doctor determines the amount of pressure applied to the chest wall by the brace before using it, and the results can be seen within a few months.

Pigeon chest is surgically treated in severe or complicated cases or when the cartilage becomes hard and does not respond to conservative treatment with the support (most cases do not need surgery), and this includes the Ravic operation and another operation with better results called the Abramson operation.

Recently, a new minimally invasive surgical technique has appeared in which the pigeon breast is treated by a method of compression (instead of excision) called the Abramson operation. Abramson procedure.

Where showed some Studies It is highly effective when selecting the right patients.

This procedure is performed by two transverse incisions on both sides, each 3 cm long, on the mid-axillary line at the maximum level of the protrusion.

A convex metal rod (implant) designed according to the shape of the breast protrusion is placed in this tunnel and the two incisions are closed.
This implant corrects the rib cage protrusion over time and treats the condition of the pigeon's chest.

With this technique, pigeon breasts can be treated without the need for large skin incisions, creation of large skin and muscle flaps, excision of various parts of the costal cartilaginous arches, cutting of rib cage bones, and various forms of reconstruction including muscle re-implantation.
The late development of chest wall stiffness that may occur when parietal resection is performed is also avoided.

Compatibility with the implant was good, however we recommend massaging the skin overlying the implant in order to avoid seromas, hyperpigmentation and superficial fascia adhesion.

Surgical treatment of sternum prominence involves a technique called the Ravitch procedure; This procedure is done with a horizontal incision in the middle of the chest to remove the abnormal cartilage from the front and push the sternum back, then place stainless steel stents across the anterior chest wall to support the sternum. The stents are not visible from the outside and are later removed through surgery.

Although this surgery offers acceptable results in the treatment of carotid thoracic, it requires large incisions, creation of large muscular and skin flaps, excision of the costal cartilaginous arches, and cutting of the sternum.

Anesthesia and care during surgery

Sometimes nasal oxygen is needed and sometimes the surgeon will place a tube to drain fluid from the surgical area.
All of these treatments are temporary and will be stopped when they are not needed (usually before discharge).

The child is expected to get out of bed and start walking the day after surgery and should practice deep breathing to keep the lungs healthy and avoid pneumonia.

Children can be discharged from the hospital when they are able to take oral pain relievers, eat and drink without difficulty, and have no fever or signs of infection.

If a surgical drain is placed at the time of the operation, the child may go home with the drain in place.
The nursing staff will teach you how to take care of the drain when the child is at home. The drain is usually removed at the first clinic visit.

Pigeon chest brace treatment is very safe. A small number of patients may experience irritation or breakage of the skin in contact with the stent. Patients are told to stop using the stent at the first sign of any irritation and are then asked to return to the doctor's office where the stent can be modified.

As with other extensive surgeries, surgical treatment of pectus carinatum carries some risks. While the Ravic operation and the Rapson operation are safe, complications can occur, including:

Pigeon chest is a psychological and morphological problem for the patient and is rarely associated with other diseases.

In general, it does not have many risks, but it may be that the formation of infections or immune reaction with the plate is one of the risks of the operation.

The best type of operation is the Abramson process.

Pigeon chest is treated either by a stent, physical therapy or surgically, where surgery is the best option in severe cases. 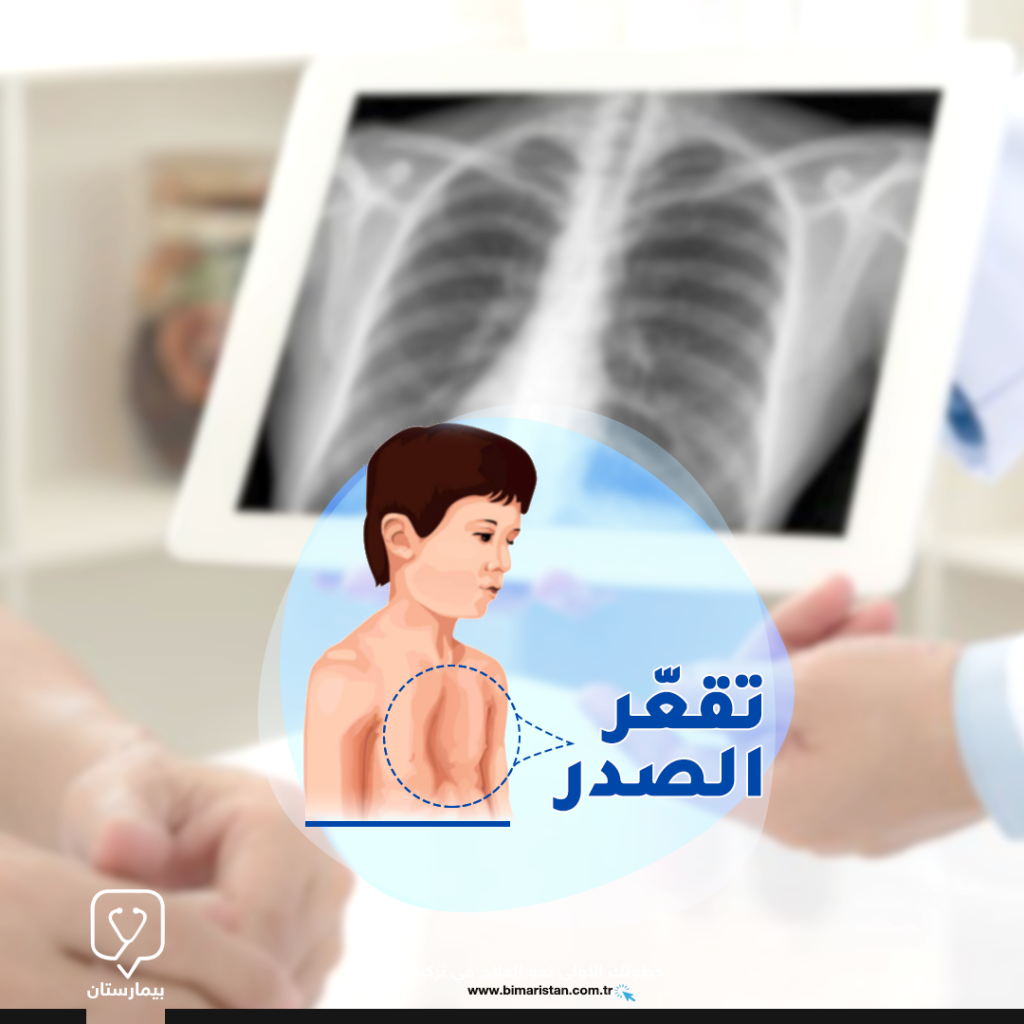 Hiatal hernia treatment relieves the patient from the annoying symptoms of hernia such as stomach acid reflux into the esophagus and difficulty swallowing, the surgical treatment is…