Skip to content
Table of Contents
What is the treatment for HoLEP (Holmium Laser Enucleation of the Prostate)?
How does holmium laser treatment for enlarged prostate (HoLEP) work?
Who needs a holmium laser excision of the prostate (HoLEP)?
Laser benign prostatic hyperplasia procedure details
Risks/Benefits of Laser Prostate Treatment in Turkey
Recovery and future prospects after laser prostatectomy
Scientific studies about prostatectomy by laser

What is the treatment for HoLEP (Holmium Laser Enucleation of the Prostate)?

Therapy enlarged prostate Holmium green laser (HoLEP), which is one of the Latest Treatment Methods It is a type of laser surgery used to treat obstruction (obstruction) of urine flow due to benign prostatic hyperplasia (BPH), in men with benign prostatic hyperplasia, in which the prostate gland is not cancerous but has become enlarged.
It leads to the formation of a number of urinary tract symptoms such as frequent urination, inability to urinate, difficulty starting urination, or loss of bladder control.

HoLEP was developed in the 1990s as a more effective and potentially less expensive surgery for urinary tract obstruction due to BPH, compared to other surgical options such as laser vaporization andTransurethral resection of the prostate.

How does holmium laser treatment for enlarged prostate (HoLEP) work?

The green holmium laser is a surgical laser that has been found to be particularly effective in performing several types of urological surgeries.

In the case of HoLEP, a laser is used to cut and remove the large prostate tissue that is blocking the flow of urine.

Who needs a holmium laser excision of the prostate (HoLEP)?

BPH occurs in more than 40 percent of men over the age of 60 and is a major cause of urination symptoms, including difficulty urinating.
As men age, symptoms of this condition can worsen.

Although many cases of urinary obstruction from BPH can be treated without surgery, patients who do not benefit from these medical treatments may eventually need surgery to avoid or deal with long-term problems such as urinary retention, urinary tract infections and bladder stones.

Patients suitable for HoLEP usually have symptoms due to a very large prostate.

Patients may not be a candidate for HoLEP if they:

In this case it is preferred Treatment by catheterization by coagulation without surgery.

What happens before a holmium green laser ablation of the prostate (HoLEP)?

The initial bedside examination will include taking a complete clinical history to determine the severity of symptoms, a digital rectal exam (using a finger to feel the prostate), measuring urine flow rate and doing a test to see how much urine is left in the bladder after urination.
These tests will help determine the level of urinary obstruction.

Laboratory tests will include blood tests, a PSA (prostate-specific antigen) level, and a urinalysis.
For elevated PSA levels, a biopsy (a sample of tissue) may be taken to make sure there is no cancer.

To measure the amount of enlargement in the prostate gland

The ultrasound will be done through the rectum.
This test is more accurate than a digital rectal exam (by finger), and helps the medical team estimate how long it will take for surgery.
The larger the prostate, the longer the surgery will take.

Cystoscopy (looking inside the urethra, prostate, and bladder with a camera) will be done in the clinic to evaluate the anatomy of the prostate and bladder and to rule out urethral strictures (scar tissue).

Depending on the patient's symptoms, a test called urodynamics may be done to evaluate how the bladder is functioning and to determine if removing prostate tissue is likely to reduce symptoms.
This is an in-clinic diagnostic test that includes a catheter in the bladder and various pressure sensors.

Before surgery, stop using blood-thinning medications for up to 10 days to prevent excessive bleeding during and after the procedure.

No food or drink is allowed from midnight before the surgery.

Patients should have a culture of urine bacteria in the two to four weeks before surgery to reduce the risk of infection after the operation.

What happens during a holmium laser resection of the prostate (HoLEP)?

HoLEP laser therapy requires the patient to be under general anesthesia ("asleep" throughout the procedure).
If for some reason a patient cannot have general anesthesia, spinal anesthesia can be used - this allows them to stay awake but blocks all sensation from the waist down.

An injection of an antibiotic is given to reduce the chances of infection.

The patient is placed on his back with the legs raised during the procedure. A surgical instrument called a resectoscope is inserted through the urethra (the tube that carries urine from the bladder). The resectoscope includes a camera that allows the surgeon to see the internal structure of the prostate gland and see where the incisions are made during surgery.

The laser is inserted into the resectoscope and used to excise (free) the enlarged prostate tissue from the capsule (outer sheath) and then block any blood vessels. The removed tissue is placed in the bladder.

The laser is removed from the resectoscope and replaced with a cutting device. This device is used to suction out tissue that is left in the bladder.

When tissue removal is complete, the resectoscope is withdrawn and a urinary catheter is placed in place.

Duration of the procedure for laser prostate enlargement treatment in Turkey

The entire process usually takes three to four hours, but it may be shorter or longer depending on the size of the prostate.

What happens after a holmium green laser excision of the prostate (HoLEP)?

The patient is admitted to the hospital overnight for follow-up and catheter care.

Bleeding from the prostate is to be expected after surgery. For most patients, this will disappear in about 12 hours.

The need for a blood transfusion due to excessive bleeding after HoLEP surgery is rare.

Fluids will be pumped through the catheter to remove blood from the urine after surgery.

Eating and drinking is permitted on the same day of the procedure as soon as the patient can do so safely. The catheter is usually removed the morning after surgery if there is no heavy bleeding.

If the patient is able to urinate well (at least two to three times after the catheter is removed), they can go home without the catheter. If he is unable to urinate, a new catheter is placed and taken out again within a week. In some cases, such as the presence of such scar tissue in the urethra, the catheter may be left in for a week after surgery and then removed in the clinic.

At first, urination may be painful and more frequent than usual. Medications may be used to relieve symptoms until some improvement is noticed within a few days. Patients are encouraged to drink plenty of fluids once the catheter is removed. This fluid helps filter urine from the blood more efficiently.

Symptoms such as frequent nighttime awakenings to urinate can take several months to permanently improve because the bladder has to adapt to removing prostate tissue and surgery can impair the ability to control the pelvic muscles.

What are the advantages of holmium laser ablation of the prostate (HoLEP)?

The use of HoLEP (Laser Enlarged Prostate Treatment) in different parts of the world has been shown to be a safe and effective procedure. Although many types of BPH surgeries are available, HoLEP surgery offers the unique advantage of being able to remove a large amount of tissue without any incisions in the body, even in very large prostates, while reducing the risk of bleeding and providing tissue for histopathology (to look for cancer). It also reduces the need for blood transfusions during surgery, reduces hospital stay to one or two days, and reduces the risk of needing repeat treatment.

What are the side effects of holmium laser ablation of the prostate (HoLEP)?

The most common side effects include:

Temporary burning and bleeding during urination.
Some blood may be seen in the urine for weeks after surgery.
Usually this is not an indication of anything serious, just that the healing process is not over yet.

Urinary incontinence (inability to control the flow of urine) is expected in all patients immediately after surgery and they should wear a dressing for the first few days/weeks.
This usually improves over several weeks.

Performing Kegel exercises can help reduce urine leakage from stress maneuvers such as coughing, sneezing or weightlifting.
Urinary incontinence persisting for a long time is very rare.
Patients may also experience the urge to urinate suddenly and quickly, but this can be treated with medication.
The risk of urge incontinence can depend on several factors including age, prostate size, symptoms and other medical problems.

What are the risks or potential complications of holmium laser ablation of the prostate (HoLEP)?

Five to 15 percent of patients are found to have previously undiagnosed prostate cancer in their prostate biopsy.
Prostate cancer can be treated after HoLEP.
This is considered the most important advantage offered by this process, as in other non-surgical procedures it is not possible to obtain prostate tissue for examination.

What happens after a holmium laser excision of the prostate (HoLEP)?

Tissue removed during surgery will be tested in a laboratory for any abnormal results.

The patient will be examined by a doctor after surgery to monitor recovery and tests, such as urine flow rate, force of bladder contraction, and degree of symptoms, will be repeated.
These tests measure the effectiveness of surgery.
Usually, patients are examined six weeks and six months after surgery.

What is the recovery period after laser prostatectomy?

Most patients require at least one to two weeks of rest at home before they can return to work.
Some patients may need three to four weeks to recover before returning to work, especially if the job is physically demanding.
Heavy lifting should not be attempted during the recovery period, however, patients are expected to walk and do light activities.

When do you call the doctor?

Call your doctor if:

Scientific studies about prostatectomy by laser

talking one Studies Analytical opinion on the possibility of laser ablation to replace transurethral resection (Turp) because of fewer side complications.

As one of the Studies The other is how can prostate cancer be treated with high-intensity ultrasound.

You can get to know Treatment of enlarged prostate by catheter coagulation.

If the results of the histopathology indicate the presence of cancerous cells, they can be treated either by android way or by highly focused ultrasound.

The best treatment for benign prostatic hyperplasia of the large prostate without surgery is holmium excision. By prostatic coagulation It is the least invasive procedure, while laser treatment of prostate enlargement is the most successful method.

Laser treatment of prostate enlargement is a holmium laser machine that cuts and removes prostate tissue through the urethra.

The success rate of transurethral resection of the benign prostate by laser is 97% in Turkey.

The cost of the technology for treating prostate enlargement by laser in Turkey ranges between 4 and 8 thousand US dollars. 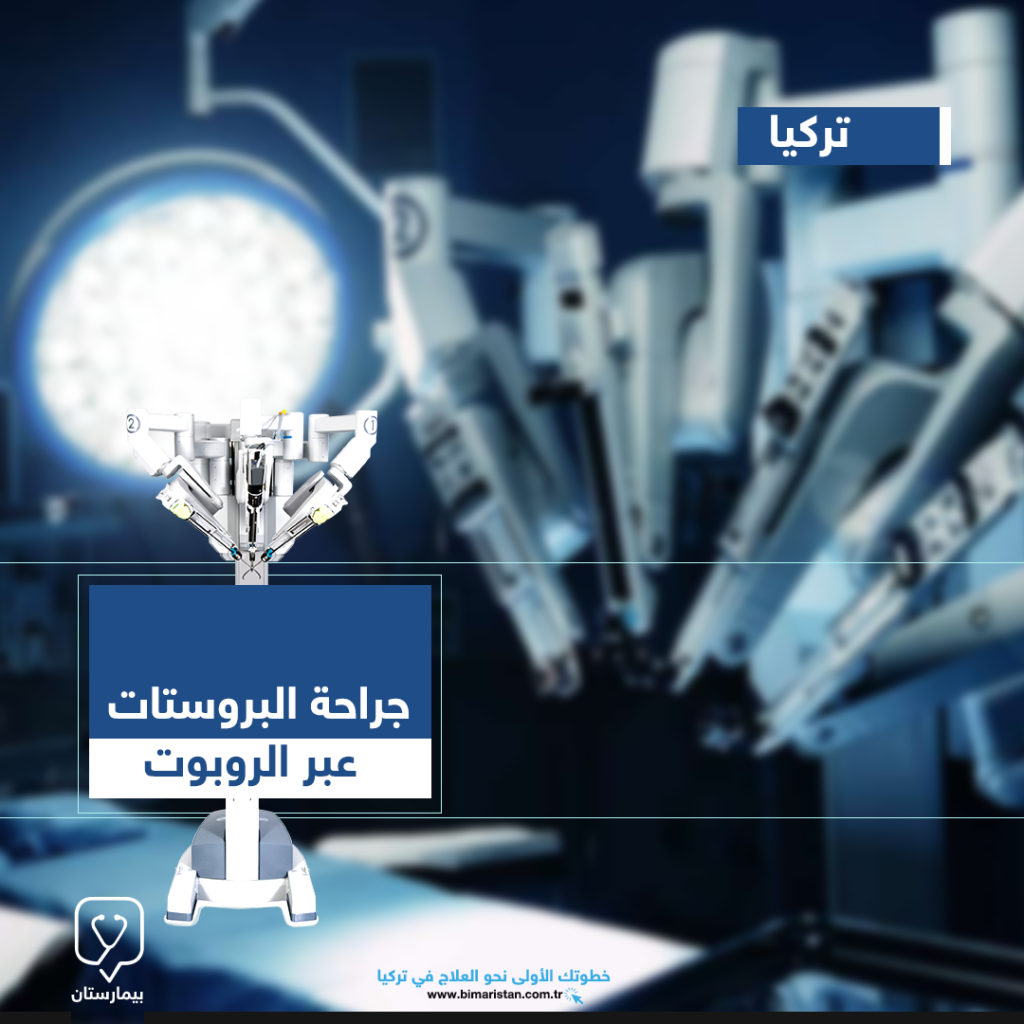