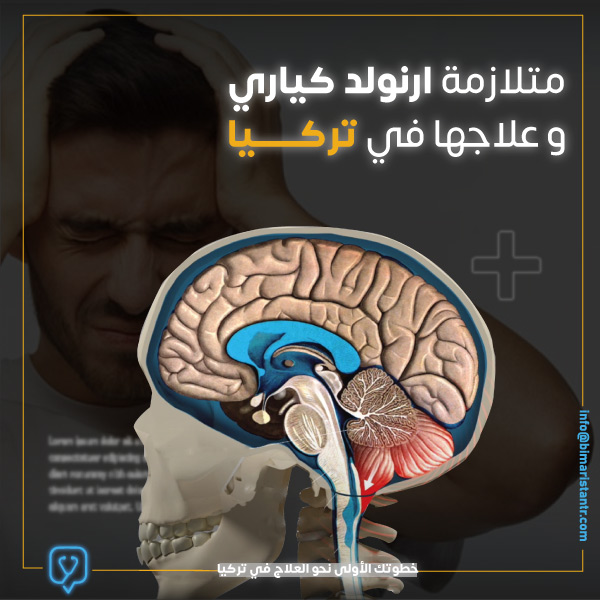 Arnold Chiari syndrome is one of the neurological abnormalities seen in children that may be associated with a wide range of symptoms. This abnormality can be diagnosed and treated by the most skilled doctors in Turkey.

What is Arnold Chiari Malformation?

The first to describe this syndrome was Dr. Hans Chiari in 1890, and later, Dr. Jules Arnold, described the syndrome more clearly.
The deformity is thought to occur during fetal life due to genetic mutations or the mother's lack of nutrients during pregnancy.
The syndrome occurs when a part of the lower brain (cerebellum) descends toward the vertebral canal through the foramen magnum due to the small bony space at the base of the skull, which leads to high pressure of the cerebellum and falls down.
This drop causes blockage of cerebrospinal fluid drainage, causing Hydrocephalus hydrocephalus;

Chiari malformation is classified into four types according to the degree of decline, symptoms, and the presence of associated neurological abnormalities.

The size of the skull is small, which causes high pressure during the development of the skull during the growth period of the child. This pattern is seen in the late childhood stages (adolescence), where the pressure increases and the cerebellum descends down through the large foramen towards the vertebral canal. This pattern can occur due to acquired causes that raise pressure (such as infections and drugs This is the lightest form and the best warning.

In this pattern, a greater amount of cerebral tissue descends through the foramen magnum towards the vertebral canal. We see a drop in the cerebellum and part of the brain stem in younger children. This pattern is associated with another neurological malformation affecting the spine that has the name of myelomeningocele, which is A type of spina bifida malformation.

It is the most serious type where the cerebellum and brainstem descend through the large fossa into the vertebral column. This type is rare and with poor prognosis. This type is diagnosed in newborns or during pregnancy by ultrasound.

The malformation can be asymptomatic, detected by chance and does not require treatment, often in the first type of Chiari anomaly, or it may be associated with many symptoms, especially those related to cerebellar functions. We mention some of the symptoms:

Other symptoms related to the functions of the cranial nerves located in the brain stem can be seen in the most dangerous patterns, such as the third type, and these signs are an indication of a neurological injury.

Diagnosis of Chiari disorder involves the use of modern imaging techniques.
Head MRI comes to the fore and is the best in diagnosis.
3D CT can also be used when diagnosing the patient, so that the need for intervention and prognosis can be determined.

Treatment is primarily aimed at relieving symptoms and improving quality of life.
In fact, the treatment of Chiari malformation depends on the severity of the condition and the symptoms. In the absence of symptoms, there is no need for treatment, but in the event of severe symptoms, the intervention must be carried out as soon as possible.
In mild cases, some symptoms such as headaches can be treated with analgesics as an occasional treatment only used in mild cases.

The cornerstone is the surgical procedure that is carried out in advanced centers and with a selection of qualified doctors andTurkey One of the best examples of this.
In fact, the main objective of the surgical procedure is to relieve pressure and drain the cerebrospinal fluid, and to do this we resort to the following well-known technique:

It is the surgical procedure used, which depends on removing a small part of the base of the skull, and we can suffice with this amount to relieve pressure.
In some cases, the surgeon resorts to opening the dura and exposing the cerebellar tonsils.
The surgeon reduces the size of the cerebellar tonsils by electrocautery, which leads to decompression and drainage of cerebrospinal fluid.

The decision to open an epidural depends on several factors related to the condition, including the symptoms seen in the patient, the age of the patient, and the presence or absence of an accompanying disease such as syringomyelia.
The surgeon may resort to the use of real-time Dopplar ultrasonography during the operation to determine the need to open the epidural or not.
[caption id="attachment_6155" align="aligncenter" width="600"]Arnold Chiari Surgery 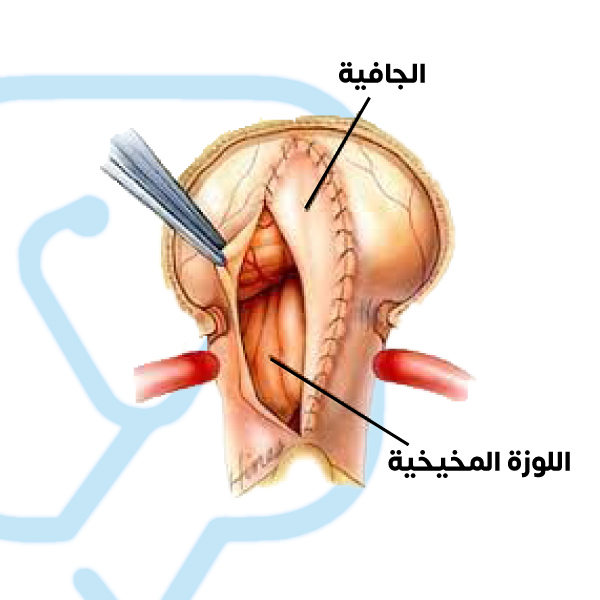 Surgical techniques for draining the fluid

One of the advanced and precise surgical techniques, where the surgeon inserts a small camera into the brain through a small hole in the skull and makes a small hole in one of the ventricles, which leads to pressure relief, a video of the operation from Here.
Some patients complain of headache and nausea for several days after the procedure.

A good technique is in the case of hydrocephalus because of the excessive accumulation of fluid, where we place a shunt that draws fluid from the brain and places the other end of the catheter in the peritoneal cavity.
The shunt may be associated with complications such as the transmission of infection to the brain or mechanical problems such as blockage of the shunt or displacement of the shunt from its place.

In fact, no surgical procedure is completely risk-free. The risks of Chiari malformation surgery are:
But under the supervision of skilled doctors in Turkey, complications can be avoided as much as possible.
Chiari malformation can be associated with spinal injuries due to compression of the spinal cord in the cerebellum and lower part of the brain. In the case of spinal cord injury, it can cause permanent injuries such as paralysis that do not regress after decompression surgery. spine surgery.

The recovery period from surgery varies according to the patient's health and ranges from 4 to 6 weeks.
Full recovery from symptoms may take months, and a follow-up MRI of the brain should be done six months or a year after the operation.
Some patients suffer from postoperative headache that lasts for several days, which can be treated with painkillers.
Postoperatively, the patient is prevented from any activity that raises pressure, such as lifting heavy weights and avoiding bending while lowering the head.
Avoid constipation by drinking plenty of water, eating fiber, avoiding prolonged coughing, and preventing the patient from any strenuous activity such as housework.
Also, the patient after surgery should not drink alcohol because alcohol increases the risk of bleeding and avoid smoking or driving a car.
You should not take NSAIDs or thinners without consulting your doctor.
The patient must commit to rest for a period of four weeks at least.

In fact, the success rate of decompression surgery according to Studies It reaches 85%, which means that the surgery is fairly safe.
85% of 95% patients had symptoms after decompression surgery.
The success of the surgical procedure depends on the health status of the patient, and if the surgeon opens the dura, or does he only remove part of the base of the skull.

Arnold-Chiari syndrome is the most common type of syndrome.
The incidence is estimated at 1 in every 1,000 births and is often asymptomatic and often detected by chance when imaging is performed for other reasons.
Females are affected more than males in a simple ratio of 1.3:1.
The second type of Arnold-Chiari syndrome is associated with other neural tube abnormalities and occurs particularly with a pathological congenital anomaly called myelomeningocele.
Arnold-Chiari syndrome type II is almost always associated with myelomeningocele, a type of spina bifida.
Here, spina bifida is a serious congenital anomaly that requires urgent intervention after birth.
Arnold-Chiari Syndrome Type III is the most dangerous but rare type, while Arnold-Chiari Syndrome Type IV is the rarest.

Is Chiari malformation a serious condition?

In some patients, Chiari deformity may develop to give serious complications, in others it is a non-accidental deformity that does not require treatment.

Is Chiari malformation a type of genetic disease that runs in families?

Chiari malformation is caused by genetic mutations in the human DNA that affect the fetus during fetal life. The malformation can affect other members of the family.

How is Arnold Chiari malformation treated?

In fact, there is no cure for Arnold Chiari malformation, but surgery can be performed to relieve symptoms in severe cases.

What should a patient with Arnold Chiari syndrome avoid?

Arnold-Chiari syndrome patients should avoid activities that raise pressure in the lower head, such as weightlifting, scuba diving, or sports that involve intense physical contact, such as boxing.

Does Chiari's deformity get worse with age?

Chiari malformation may worsen with age due to increased pressure during the child's development, leading to a more severe descent of the lower part of the brain into the vertebral canal.

The page you requested could not be found. Try refining your search, or use the navigation above to locate the post.