How are neck disc and back disc treated with laser in Turkey?

There are several different types of disc surgery, including traditional surgery, microsurgical surgery, and laser back surgery. Below, we'll explore what makes each style different.

During traditional back surgery, the surgeon makes a long incision in the back. Then they push the muscles and other tissues aside in order to reach the affected area of the spine.
This leads to a longer recovery time, and may cause tissue damage.

used MISS Smaller incision than traditional surgery. A special instrument called a spacer tube is used to create a small tunnel to reach the surgical site.
Various specialized tools may be placed in this tunnel during surgery.

Because it is less invasive, MISS can result in less pain and faster recovery.

Secondly: Disc surgery through a microscope

Where a very small incision is made, then the surgeon performs the operation through this incision using very precise machines using the help of surgical microscope.

During non-surgical laser disc treatment, laser beams are used to remove portions of the cartilage around the spinal cord and back nerves.
This is done by a needle that is guided using an interventional radiology.

Unlike other types of back surgery, it may only be suitable for very specific cases, such as when cartilage pressure on a nerve causes pain.

Laser back surgery is often confused withMISS . surgery to each other, and to make matters more complicated, MISS You may use a laser occasionally, but not always.

Laser back surgery is relatively rare, and there are few clinical studies that have shown benefits over other methods.

What do you expect from the laser disc treatment in Turkey/Istanbul?

When the nerve from the cervical disc is compressed, it can lead to pain, discomfort and muscle problems.

The causes of nerve pain related to the spine, such as a herniated disc or bone spurs, is pressure on the nerves.
One example of such conditions is sciatica, in which the sciatic nerve becomes pinched, resulting in pain in the lower back and leg.

A laser may be used to help decompress the nerve to relieve pain.
This is done under local anesthesia, which means that the skin and muscles around your back are numbed for pain.
Sometimes, if necessary, general anesthesia may also be used for this procedure.

One of the most well-studied methods of laser back surgery is called percutaneous laser disc decompression (PLDD). This procedure uses a laser to remove disc tissue that may be causing pressure and nerve pain.

During PLDD, a small probe containing a laser is passed into the heart of the affected disc (nucleus). This is achieved with the help of imaging technology. Next, laser energy is used to carefully remove tissue that might be pressing on the nerve.

The benefits of laser back surgery are that it is less invasive than the traditional method of back surgery.
Additionally, it can be performed on an outpatient basis under local anaesthesia.
In many ways, it is very similar to MISS.

There is a limited amount of information regarding the overall effectiveness of the laser disc back treatment technique compared to other methods.

One 2017 study compared PLDD with another surgical approach called micro discectomy. The investigators found that both procedures had a similar result over the two-year recovery period.

One disadvantage of laser back surgery is that you may need additional surgery for your condition.
A 2015 study found that the likelihood of repeating the operation after a microdiscectomy is lower compared to PLDD.

Additionally, a 2017 meta-analysis of seven different lumbar disc disc surgeries found that PLDD ranked among the worst based on the success rate, and was in the middle of the resurgery rate.

Each procedure can have potential side effects or complications.
This also applies to laser back surgery.

One of the main potential complications of laser back surgery is damage to the surrounding tissues.
Because a laser is used in the procedure, thermal damage to surrounding nerves, bone and cartilage can occur.

Another possible complication is infection.
This can happen during probe placement if proper sterilization procedures are not followed. In some cases, you may be given preventive antibiotics to help prevent infection.

Recovery time can vary depending on the individual and the specific procedure being performed.

Some people may be able to return to normal activities relatively quickly, while others may need more time.
The duration ranges from days to several weeks.

Major surgeries require a longer hospital stay after the operation, and recovery may take several weeks in the case of traditional surgery.
According to the Johns Hopkins University Spine Center, people who undergo traditional spine surgery should expect to miss 8 to 12 weeks of work.

In contrast, minimally invasive MISS surgeries are often performed as an outpatient procedure, which means you can go home the same day.

In general, people who have minimally invasive surgery may return to work within about six weeks.

You may have read that laser back surgery has a faster recovery than other procedures.
However, there is very little research on how the time to return to daily activities compares.

most important Study It was performed and showed that about 95% of the cervical disc was cured by the laser treatment technique.

In the end, the disc laser treatment is performed for mild and moderate cases and can be performed as an experimental treatment for severe cases before major surgeries are performed.

The cost of laser disc surgery in Turkey

The cost of laser disc treatment in Turkey varies according to the degree and quality of the center and the number of affected vertebrae, but in general the cost ranges between 500-1000 dollars for the disc.

we are in Bimaristan center We direct you to the best hospitals and centers for the treatment of herniated disc pain in Turkey.

Minimally invasive disc surgery is performed either laparoscopically or through a surgical microscope.

The disc is treated with a laser by inserting a probe into the affected disc, and then either radio waves or laser pulses are sent to the disc, which leads to disc contraction, thus removing pressure on the affected nerve.

The choice of treatment varies from person to person, but laser disc treatment is one of the latest minimally invasive treatment methods.

The cost of a herniated disc in minimally invasive procedures ranges from $1,200 to $2,500 per disc.

The cost of laser disc treatment generally ranges between 500 and 1000 USD. 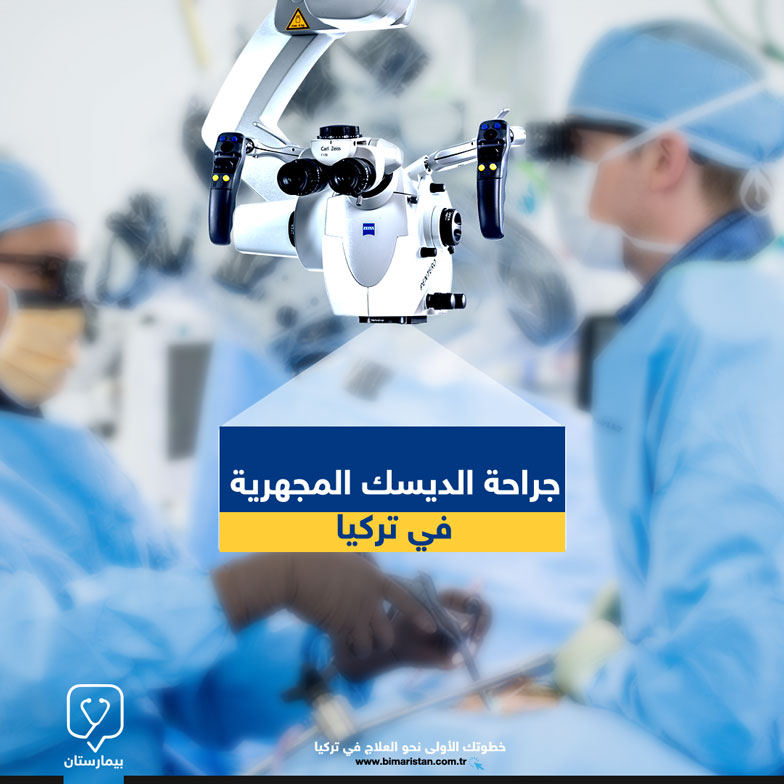 Microdiscectomy Surgery Microdisc surgery, which is considered the gold standard for getting rid of disc pain experienced by older adults…

Endoscopic herniated disc treatment is one of the latest methods in Turkey to treat herniated discs in the lower back and neck using the least invasive treatment methods,…

Injectable disc treatment, as this is one of the latest methods of pain relief in Turkey and often avoids the patient…